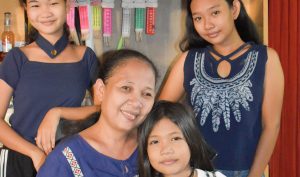 Miralyn Basallo, 43, had failed numerous times in her love life, but her responsibilities to her three daughters motivated her to never give up. Her third boyfriend died while she was pregnant, leaving her in a desperate situation. She was on the verge of giving up her child for adoption after birth as she is also caring for two children from her previous two failed relationships. Her family’s life however, was never the same ever since they were accepted as one of the Pantawid Pamilyang Pilipino Program (4Ps) beneficiaries through the Modified Conditional Cash Transfer (MCCT) in 2013.

Her narrative, which focused on their family, won first place in the category “Salaysay ni Inay” in this year’s Salaysay ng Buhay ng Pamilyang Pantawid. The Search selected top stories from each of the 16 regions, including BARMM, which highlight the development of family beneficiaries in order to advocate for the Program’s positive impact in the lives of its beneficiaries.

With no one to turn to, she took the challenge of being a father and mother to her three children in 2013 and returned to Cebu, where she had inherited a small plot of land.  A few days after they arrived, Typhoon Yolanda hit and affected their town. She wondered if it was just another trial or a test of her faith in God. However, the tragedy turned out to be a blessing in disguise, as it provided her with numerous opportunities to become more involved in the community.

Since being in the Program, Miralyn became the President of a women’s organization in their community, a Barangay Health Worker (BHW), a representative in various trainings led by the private organization that assists the oppressed, LAW Inc. Later on she also became an officer of Anti-Violence Against Women and Their Children (VAWC) in their barangay.

She and other Program beneficiaries have improved their perspectives on themselves and their families by attending Family Development Sessions (FDS) on a regular basis. They are also encouraged to seek government assistance for health and education-related issues. The Program enabled her to take part in other community activities, allowing her to disseminate pertinent information against the use of illegal drugs as an “interventionist” in Community Base Rehabilitation Treatment (CBRT) and an “implementer” in Community Support and Reintegration (CSAR).

Her beliefs gradually changed as she progressed through the Program’s value transformation and spiritual development. She learned to appreciate life and love herself. She realized that she could act as a mother and father to her children and lead her family on her own. She also realized that she does not need a partner to understand the true meaning of life because her three children gave her complete satisfaction, or “ultimate happiness.”

Recognizing the importance of education for herself and her children, Miralyn is currently pursuing a Bachelor of Science in Elementary Education, while her children continue to study in secondary and elementary schools. They frequently receive awards and recognition. She believes that completing her studies will allow her to better support her children in the long run.

Miralyn led a colorful life that had begun with numerous failures but learned to rise above them all. Her strong pillars of support were her faith in God, her outlook on life, her patience, and the help of the 4Ps.

Miralyn is starting over and she knows that one day, she and her children will be able to realize their dreams. She may have failed in her marriages, but the Lord never failed her.#