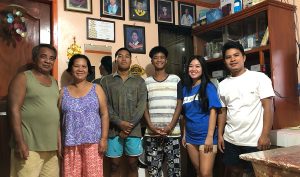 Edmundo V. Guzman promised Manuela that he would be a good partner in raising their children. However, as they continued on their life’s journey, they were hit by waves of difficulties, causing them to live in extreme poverty. The Pantawid Pamilyang Pilipino Program (4Ps) served as their boat and paddle, guiding them out of this situation and providing opportunities to better their lives.

Edmundo’s story, which focused on their family, won first place in the category Sa Kwento ni Tatay in this year’s Salaysay ng Buhay ng Pamilyang Pantawid. The Search selected top stories from each of the 16 regions, including BARMM, which highlight the development of family beneficiaries in order to advocate for the Program’s positive impact in the lives of its beneficiaries.

Edmundo’s family became a 4Ps beneficiary in 2009, which provided them with new opportunities and made life more manageable. As 4Ps beneficiaries, they received ten thousand pesos (P10,000) in additional capital for their fish vending from the Sustainable Livelihood Program and through the Program’s guidance, their savings have reached forty thousand pesos (40,000).  His son was also awarded with the Expanded Student Grant-in-Aid Program for Poverty Alleviation (ESGP-PA) scholarship grant that allowed him to complete his college education and now employed as an Administrative Assistant at Aurora State College of Technology (ASCOT).  Manuela, Edmundo’s wife, on the other hand, was able to attend various seminars such as bookkeeping through the Family Development Sessions (FDS). This helped her expand her knowledge in sales and budgeting.

As a result of their hard work and with the government’s assistance, four of their six children now have their own stable jobs in various companies as an Engineer, Administrative Assistant, Accountant, and Bank Loan Assistant. Meanwhile, two of their children continue to attend school.

Edmundo’s family has now bought a house in which they can live comfortably. To supplement their income, they bought two boats, opened a computer shop, and ran a fish stall in the market. With their improved situation, the family is prepared to leave the Program.

“Nagpapasalamat ako sa Programa sapagkat ito ang tumulong sa aming pamilya upang mas manatiling malakas, nagmamahalan, nag-uunawaan at nagpatibay ng aming pundasyon bilang isang pamilya (I am grateful for the Program because it helped our family to stay strong, to love and understand each other, and strengthen our family foundation),” he said.#