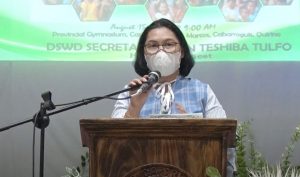 The graduates were members of the Indigenous Peoples (IPs) groups from the Municipality of Cabarroguis who were selected to be part of the MCCT Program as a result of the validation conducted in Geographically Isolated and Disadvantaged Areas.

In her inspirational message, Director Gemma B. Gabuya, 4Ps National Program Manager, said that the MCCT graduation was extraordinary. This is the first graduation ceremony that was held for the IP beneficiaries of the Program. In her speech, Director Gabuya shared that graduation from 4Ps does not necessarily mean that the households have become rich. Beneficiaries can and may graduate from the 4Ps when they showed positive indicators of human development such as in education, health and economic livelihood. And the 4Ps beneficiaries of Cabarroguis already exhibited two of these indicators. They use the grants from 4Ps to send their children to school and avail of basic health services. They put premium to being healthy as they believe that this is one way to progress.

Director Gabuya also recounted the story of one of the beneficiaries as she was moved by her realization that ‘being poor is not permanent; as long as we work hard, persevere, be wise, and put God at the center of our lives. She mentioned that such reflections from the beneficiaries are deeply encouraging. This only goes to show that once we have set our goal, nothing can stop us.” she added.

Director Gabuya lauded the efforts of the graduates in their fight against poverty. She mentioned that “if someone asks me where the PhP 900 Billion invested in the Program had gone over the course of its implementation, I am proud to say that “kayo po ang naging bunga na hina-harvest na ngayon ng Programa. (Your improved well-being is the Program’s success and milestone. We have proven that the beneficiaries have been helped out of extreme poverty.)

“Graduating/exiting from 4Ps does not mean that the government will no longer be there to assist you. Your exiting from 4Ps will give chance and pave the way for other poor households, it may be your neighbors or relatives, to be part of the Program.” Director Gabuya emphasized.

Lastly, Director Gabuya acknowledged the members of Quirino’s 4Ps Provincial and Municipal Advisory Councils, the Provincial Administrator, the six Municipal Mayors, Cabarroguis Sanggguniang Bayan members, and barangay officials during the ceremony. She emphasized that the concerted efforts of the DSWD, the LGUs and other partners helped to ensure that 4Ps beneficiaries will have a better chance in their fights against extreme poverty.

In addition to the certificates, the graduates were also given P10,000 each immediately following the program under Ordinance No. 7, Series of 2022 of the Sangguniang Panlalawigan of Quirino.

The MCCT Program is designed to reach out to families who are definitely poor and more vulnerable and disadvantaged but are not covered of the Regular Conditional Cash Transfer (CCT) because of their being excluded in the enumeration of the National Household Targeting System (NHTS) or Listahanan.

4Ps is an investment in human capital of the national government that provides conditional cash grants to the poorest of the poor, to improve the health, nutrition, and the education of children aged 0-18 years.###