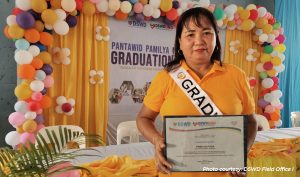 Quezon City – Most graduating/exiting 4Ps beneficiaries have similar traits. They were accepted in the Program because they belong to the poorest of the poor; they were grateful and cooperative; they used the government interventions provided to improve their lives; and, made themselves successful.

Let us look at some of these beneficiaries’ experiences on their path to success by going the extra mile.

Leaving for a better life

Edna Puda used to describe her family’s life as “simple but challenging.” Despite being together, her family can’t seem to solve their problems, and worse, are still left with nothing. To them, every second counts in order to get through the day.

Edna is a mother of nine from Brgy. Balingasay, Bolinao, Pangasinan. Her family is poor and feels she has nothing to be proud of.

She recalls having to climb mountains with her husband and their two eldest children to gather tree branches to sell for a living. Edna carries the bunch of tree branches on her head after a long day, and she did so even when she was seven months pregnant. They had no choice but to take risks in order to overcome obstacles in their daily lives.

It pains her to send her three children to school with no money. She can only give them warm hugs and kisses, along with prayers. One day, their three kids were yelling outside their house. Edna dashed over to see how they were doing. Finding three coconuts on the ground surprised her and by selling helped finance their daily expenses in going to school. His husband also accepted any job offer he could get to help pay for their children’s elementary school education.

Edna’s most memorable moment was in August 2008. It was when her family was named as one of Pantawid Pamilya’s Set 1 beneficiaries. Seeing her name on the list was an answered prayer. She participated in the Program and became the first Parent Leader in their barangay.

Change is in the air

She learned to cook delectable dishes by reading recipe books and sold them every afternoon. When she received livelihood assistance from the Self Employment Assistance Kaunlaran (SEA-K) Program, her small business grew. She also used the Alternative Learning System [ALS] to complete her high school education. “Nagulat ako sa pagpasa ko sa ALS. “Ang buong akala ko walang nakaalam na ako ang katangi-tanging nakapasa sa aming 21 na kumuha ng pagsusulit mula sa aming barangay (I was shocked when I passed ALS.” I totally thought no one knew that I was the only one who passed among the 21 examinees from our barangay),” Edna proudly revealed.

Edna gave up her dream of attending college in order to help her daughter complete her dream degree in education. So, while her daughter is still in high school, they agreed to set aside money from their earnings to cover her college tuition.

Her daughter passed the Department of Science and Technology (DOST) scholarship exam. This paved the way for her daughter’s dream of one day becoming a licensed teacher to come true. Edna mentioned that her sixth child, a licensed teacher, is now teaching Grade 11 at Balingasay National High School. “Gaya ng iba, hinahangad naming umahon sa kahirapan.  Kaya kahit nahihirapan, pinili pa rin naming magpatuloy at ipaglaban ang aming mga pangarap (“Like everyone else, we want to get out of poverty. Even if we are challenged, we choose to rise and fight for our dreams),” Edna exhorted

When Edna’s family graduated from Pantawid Pamilya, she recalled the occasion. After eight (8) excellent years, she has mixed emotions about leaving the Program. Her participation in the Program may be over, but the lessons she learned will live on. “Sa mga pinuno ng aming bayan, mga Municipal Link, pareho kong Parent Leader at benepisyaryo, hinding hindi ko kayo makalilimutan. Naging parte kayo ng bawat pagtahak ko sa daan patungo sa tagumpay” (“To the leaders of our town, Municipal Links, to my Parent Leaders and co-beneficiaries, I will never forget you. You have been a part of my every step on the path to success),” Edna spoke as she stood in front of the 148 household beneficiaries at the first Pantawid Pamilya Graduation Ceremony in Bolinao, Pangasinan.  ###