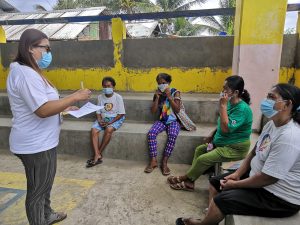 Quezon City – The Department of Social Welfare and Development (DSWD) is fast tracking the enumeration of beneficiaries under the Modified Conditional Cash Transfer (MCCT) to validate their registration in the Pantawid Pamilyang Pilipino Program or 4Ps.

The MCCT Program was launched in 2012 to reach out to families who are poor and are in a more vulnerable and disadvantaged situation but were not covered by the enumeration under the Listahanan.  The MCCT beneficiaries include the Homeless Street Families (HSF), the Indigenous Peoples (IPs) in Geographically Isolated and Disadvantaged Areas (GIDA), and Families in Need of Special Protection (FNSP) who were victims of disasters or armed conflicts, thus, were temporarily placed in evacuation centers or in transitory shelters.

Under Republic Act No. 11310 or 4Ps Act signed in 2019, qualified household-beneficiaries of the 4Ps shall be selected using a standardized targeting system, which is the Listahanan.  The institutionalization of the 4Ps requires all beneficiaries including the MCCT families to be assessed as poor or near-poor.

Twelve (12) Field Offices have already commenced the validation of the MCCT beneficiaries. These are NCR, CAR, I, II, III, CALABARZON, MIMAROPA, V, VI, VII, VIII and X.  Currently, FOs CAR, XI, XII, Caraga and NCR are conducting their respective orientations, while FO IX and BARMM have already scheduled the conduct of orientation. The validation is expected to be completed by the end of April 2022.  Results of the validation will determine the MCCT beneficiaries who are still eligible to continue receiving cash grants and those who have achieved self-sufficiency level of well-being who will be prepared for their eventual exit from the Program.

The MCCT Program was established prior to the enactment of the 4Ps law to assist the HSF transition from living in the streets to a more decent dwelling; facilitate access of HSF, IPs in GIDA to health, education and other basic services; achieve zero deaths among infants and children, and children under five years old; zero deaths among pregnant women under normal condition; ensure all 3-5 years old children are availing early childhood care and development services; ensure all 6-18 years old children in target areas are in school; and ensure third-degree malnourished children under five years of age are rehabilitated. ###